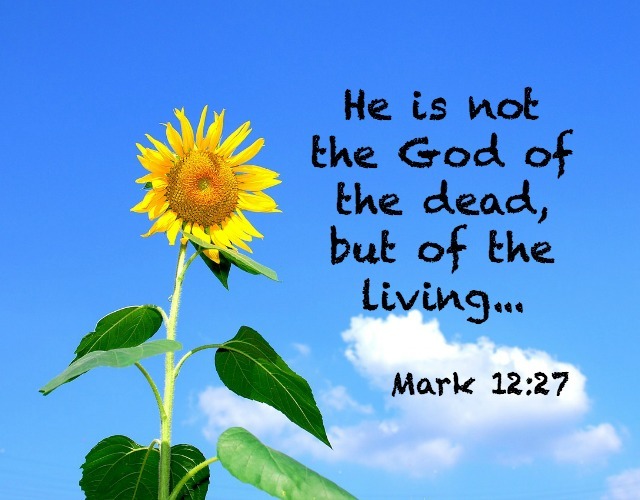 In last week’s lesson the Pharisees did their best to trick Jesus and turn the Herodians against Him, but they failed. This week in Mark 12:18-27, the Sadducees get their shot.

The Jews, as a whole, believed in the resurrection ~ actually believing in two types of resurrection: 1)A personal resurrection in which they would be raised after death, leaving this world to enter the next. and 2)A national resurrection with the conqueror/victor type Messiah appearing to bring Israel to political dominance and fulfill the Kingdom promises of the Old Testament. However, the Sadducees had some differing views. They had a more conservative attitude toward Scripture than the Pharisees and other Jews, objecting to the Pharisees’ unwritten traditions, possibly because they preferred to have the freedom to interpret the Scriptures as they wished. The Torah, or Law of Moses, was revered much more highly than the rest of the Scriptures, and Apocalyptic books, such as Daniel, were rejected altogether. They denied resurrection, immortality of the soul, eternal rewards, and a world to come. They focussed on the nation of Israel in this present world. Their highest agenda was to cooperate with the Romans, because this life is all there is. And since there is no afterlife, the only rewards and punishments happen here and now on earth. Getting along with those in charge meant a more comfortable life for the Sadducees; they were rewarded generously.

The Pharisees and Sadducees were enemies, but allied in the concern for getting Jesus out of the picture, thus we have the Sadducees’ attempt at trapping Him in Mark 12:18-27. Moses taught the Levirate marriage, which is a type of marriage in which the brother of a deceased man is obliged to marry his brother’s widow, and the widow is obliged to marry her deceased husband’s brother. The Sadducees wanted to make Jesus look foolish by asking what they thought would be impossible for Him to answer: “There were seven brothers; and the first took a wife, and died leaving no children. The second one married her, and died leaving behind no children; and the third likewise; and so all seven left no children. Last of all the woman died also. In the resurrection, when they rise again, which one’s wife will she be? For all seven had married her.” Since they really didn’t believe in resurrection, they didn’t want a real answer, but only to trick Jesus. However, He answers them by explaining there will be no marriage at all, and shows them their ignorance and unwillingness to learn by pointing out that Moses DID talk of resurrection. Using a book from the Torah which they revered, Jesus quoted Exodus 3:6 “…I am the God of your father, the God of Abraham, the God of Isaac, and the God of Jacob…” If there was no resurrection, God would have been speaking in the past tense, instead of the present tense. He would have said, “I WAS the God of your father…” Verse 27 says, “He is not the God of the dead, but of the living; you are greatly mistaken.”