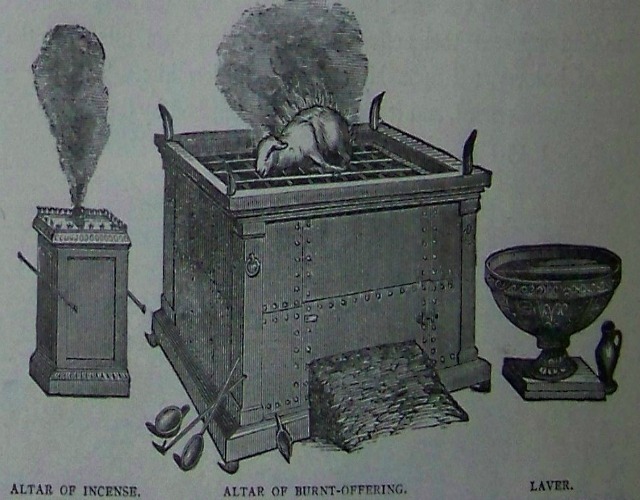 The question came up in Sunday School concerning how Jews handle the lack of animal sacrifices in post Temple destruction times, since unlike Christians they don’t believe Jesus was the ultimate sacrifice on the cross and no further sacrifices are necessary. Rusty answered the question nicely, but I came home and had to dig a little deeper, and here is a quick recap of my findings.

The earliest record of a sacrifice to God was by Cain and Abel. Many sacrifices for many reasons followed, and altars were built in many locations throughout the early years. However, with the Torah, new laws were established and it was no longer acceptable to build altars anywhere desired and by anyone that wants (Deuteronomy 12:4-14). Offerings could, at first, be brought to the Tabernacle, a mobile Sanctuary, but this was only considered temporary. Once King Solomon built the Holy Temple, all sacrifices had to be brought there.

Then this first Holy Temple was destroyed and there was no longer a place to offer sacrifices. God, through Hosea, told the Israelites to atone for their sins through prayer, asking for forgiveness and offering praise with their lips (Hosea 14:2). Similar instructions were given in Proverbs 28:13. So, the Israelites were given a way to be forgiven through confession and prayer, when it was impossible to offer sacrifices at the Temple. But, remember, when there is a place to do so, sacrifices must be offered.