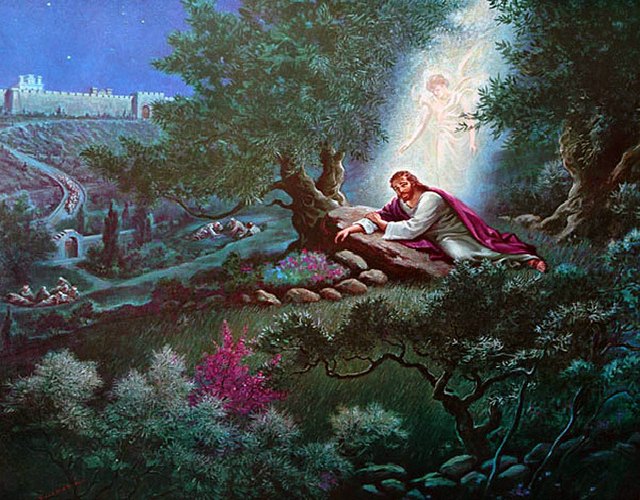 No agony could be greater than what Jesus was about to endure. The physical pain was definitely excruciating, but nothing could be worse than bearing the sins of the world. Our lesson covers Mark 14:27-42. It was Thursday night of Passover week, probably around midnight. Verse 26 tells us Jesus and His disciples (11 of them – Judas had already gone) left the city for the Mount of Olives to pray. Verses 27-31 contrasts the disciples’ human weaknesses from Christ’s Heavenly strengths. We see Jesus’ knowledge in verse 27, the opposite of what we see in the disciples. Jesus, with His supernatural knowledge, tells them, “You will all fall away.” He knows the future, both what is about to happen to Him, and the cowardly reactions of the disciples. God will strike down the shepherd, and the sheep shall be scattered. Jesus will courageously undergo the ultimate torture, while the disciples will cowardly hide their connection to Him. Because of their ignorance, the disciples were focused on death, and their cowardice caused their fear and need to abandoned Jesus (at least temporarily). Verse 28 demonstrates Christ’s power:  But after I have been raised, I will go ahead of you to Galilee. He would return after His death and resurrection bringing them together for restoration.

Upon reaching Gethsemane Jesus leaves 8 of the 11 by the entrance to the garden. According to Luke 22:40 in its parallel passage Jesus said,“Pray that you may not enter into temptation.” But they fell asleep and later were unable to avoid the temptation to deny their connection with Christ. Jesus took Peter, James, and John with Him deeper into the garden and became visibly distressed. Becoming the sin bearer and experiencing the wrath and alienation of God was totally against His nature, and it was almost more than He could bear. His tearful petition at this point to “remove this cup” was His greatest moment of temptation. Satan wanted Jesus to get out of it, but then God’s redemptive purpose would not have happened and Satan would have won. Jesus was not asking God to do something outside of His Way, He just wanted to know if another way was possible. He was Holy willing to be submissive to the Father, and now it was time. After leaving His disciples three times to pray, returning each time to find them asleep, He informed them, “the hour has come; behold, the Son of Man is being betrayed into the hands of sinners. Get up, let us be going; behold, the one who betrays Me is at hand!” (vs 41b-43)