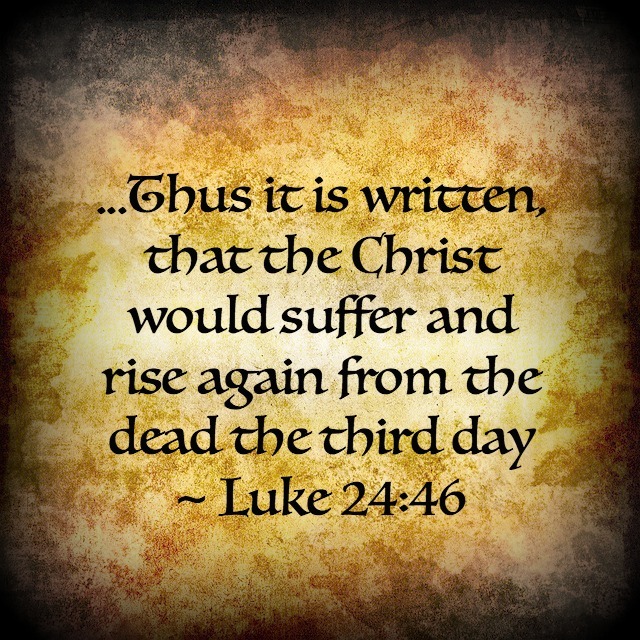 “She will bear a Son; and you shall call His name Jesus, for He will save His people from their sins.” (Matthew 1:21)

Jesus predicted His death in John 12:27, Mark 2:19-20, Luke 12:50, 13:32-33, and 17:25 as well as in today’s text (Mark 10:32-34). He explains to His disciples what will happen to Him as foretold in the Old Testament. Jesus knew the Old Testament perfectly, but also had perfect divine knowledge: He was the perfect sacrifice that was necessary to end the continual and cyclical Jewish sacrificial system. In verse 32 He was leading the way to Jerusalem walking ahead of His followers. Perhaps the disciples were dragging their feet because they were amazed and fearful of what was to come. They knew Jesus was the savior, but the concept of a dying Messiah was not quite what they had in mind. They, like other Jews, were taught their Messiah would come to set up His kingdom, and now they were fearing their concept was wrong. Jesus tried to prepare them by pulling them aside and explaining. However, no amount of preparation and explanation could truly equip them to handle what was to come. They still denied Christ when the time came and ran away in fear. But, they did remember what He said and after the fact came back together and did great things.

In verse 33 (also prophesied in Isaiah 53) Jesus describes to His disciples all the terrible things that He was about to suffer:

This terrible suffering was necessary because a perfect sacrifice was necessary to end all sacrificing. Jesus Christ personally and willingly suffered and died in our place for our sins (I Peter 2:21-25).